Mining For Gold: How To Handpick the Best Elements of Your Wedding Theme


When April was newly engaged and starting to think about the kind of wedding she wanted to have, she had a point of reference at the ready: Tim Burton's "The Corpse Bride" a movie that she loved.


Now, keeping in mind that when I got married, it was a looooooow-key event; it was a Friday at City Hall with a small group of family members and a few close friends followed by a relaxed dinner at a steakhouse. This time around, our mother had a few ideas about April's upcoming nuptials and she very quickly put the kibosh on the Tim Burton influence by not-so-subtly and colourfully advising (telling?) her, 'Oh no, none of this Corpse Bride crap for the wedding!!'   What she didn't realize or stop to consider was that April wasn't looking to recreate the sunken cheeks and non-living pallour -

-but loved the Victorian aesthetic and the evocative, brooding colour palette (shades of blue and gray with flourishes from the purple family) that she found dreamy and romantic.  She and her then-fiancé wouldn't have used the movie as a template, but as a buffet of ideas, picking and choosing the elements that spoke to them.  Sometimes though, when we're in the early planning stages, it can be hard to figure out how your inspirations can translate to real-life flourishes on your big day. This week, Brides.com featured a timely piece on finding your wedding style and staying on-track, so without further ado, here's the 411!

*~Staying above-ground: How NOT to fall down the wedding planning rabbit-hole!~*

It's so easy to follow tangents during those early planning days but it's nice to know that sometimes a little can go a long way and there can be huge fireworks from little sparks of creativity. And that beauty can be found in the most unexpected places (like a stop-go animation film about a living groom and his living dead-girl bride!)

PS - On an unrelated note, please excuse the quiet week in the blog BUT I have a good reason; last week was our couples soak and I kid you not, I've been so amazingly, ridiculously chill ever since. I won't say needing-a-mirror-under-my-nose-to-see-if-I'm-still-breathing, but calm yet buoyant? I mean sure, we were pretty buoyant in the Epsom salt pool, but we walked/floated out of the spa feeling lighter and less-stressed and almost joyous? I'm putting float spas on blast in the best possible way, everyone: if you ever have an opportunity to do a float, pleasepleaseplease take the plunge! Even if youre claustrophobic, you can do a open float. And if you DO give it a shot, let us know what you thought of it!

Posted by Limitless Events at 23:41 No comments: 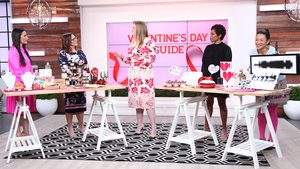 February is a month chock full of expectations; we're halfway through our dreary winter, but we hold out hope that an adorable little rodent will offer us a glimmer of hope with a prediction of early spring when Groundhog Day rolls around. Then, we hope for a different glimmer - this time by candlelight, or from the spark between ourselves and our someone special - when Valentine's Day arrives a few weeks later. But, for folks who are planning a wedding, Valentine's Day could be smack dab in the middle of a window of time when there's a lot of other things going on (like meetings with vendors, menu tastings, dress and suit shopping) and a bit of money moving and shaking (when making deposits or paying for services) from your pockets into the wedding budget abbyss!

So then, we wonder just how big we need to go to celebrate Valentine's Day, in light of the upcoming wedding.  This week on The Social, Meredith Shaw brought a selection of gift ideas that ran the gamut from traditional (jewellery) to modern takes on classics (pocket squares) and in the spirit of taking the pressure out of the day, here's a look at the segment to get your juices flowing if you're in the (somewhat) last-minute-gift-shopping camp:

*~Valentine's Day made AWESOME! Gifts that pack on the impact without making a huge (financial) dent!~*

Two of the ideas featured really stood out for me: the personalized perfume and the wooden pocket squares. The chance to design the perfume to wear on the day you say 'I Do' sounds like a dream come true (because I'm a scent hound, this gift is RIGHT UP MY ALLEY!)  and another place to personalize an element of your big day. And the wooden pocket square is another way to inject a little more 'you' in your suit!

So..... how will you mark YOUR Valentine's Day? This year will mark 26 years to the day I met my husband (a blind set-up by a friend ON VALENTINES DAY, no pressure there!) and while I'm working that day, the next day we're doing a float together. Not one of these -


One hour, not a care in the world, talking and handholding optional? That sounds like a little piece of paradise!

Posted by Limitless Events at 17:18 No comments:

When Weddings Go To The Ballet (Or We Bring The Ballet To Our Weddings!)

or a movie scene, to express what we can't quite say out loud -

a pet, to remind us that sometimes you just gotta curl up, batton down the hatches and let a cat-nap soothe your soul.


We are surrounded by the stuff of dreams and we siphon a little bit of the magic that moves us to incorporate in the ways we live and love so I was instantly smitten when Brides.com presented wedding tablescapes by ballet! Ballet can cover all the bases, aesthetically-speaking: dark and gothic...

Passion, drama and a fiery palette
Via The Stage UK

or whimsical and playful.


Not to mention the innate style of the dancers themselves - what they wear and how they look so effortlessly chic - being chock full of ideas for bridal parties!


Here's a little touch of ballet-inspired wedding style to whet your appetite..

*~Wedding ideas that raise the barre: tablescapes from centre stage!~*

The possibilities really are limitless.... and wonderful.... and can be familiar but somehow reimagined! Where will YOU find your inspiration that's en-pointe?

Wishing you a day as limitless as you are~
Lisa and April
Posted by Limitless Events at 15:02 No comments: